The birthplace of Elvis Presley is Tupelo, MS. The Elvis Birthplace Park includes a museum, a chapel, the two-room house in which Elvis was born and his childhood church.

Elvis Aaron Presley was born in Tupelo, Mississippi, on January 8, 1935, to Vernon and Gladys Presley. Born in a two-room house built by his father, grandfather, and uncle, Elvis was one of the twin brothers born to the Presleys. His brother, Jessie Garon, was stillborn. Elvis grew up in Tupelo surrounded by his extended family including his grandparents, aunts, uncles, and cousins.

Financially, times were hard on Vernon and Gladys, and they had to move out of the house where Elvis was born when he was only a few years old for lack of payment. Vernon and Gladys worked various jobs while in Tupelo and moved several different times during the thirteen years they resided in Mississippi.

THE LITTLE SHOTGUN HOUSE (pictured above)

In 1934, Vernon Presley borrowed $180 for materials to build a small frame house in East Tupelo. Vernon’s father Jessie and Vester, his brother, helped with building the little shotgun house. It was in this humble two-room home lit by a single light bulb in each room that Elvis Aron Presley was born on January 8, 1935. Elvis was one of the twin brothers born to the Presleys. His brother, Jessie Garon, was stillborn.

The family lived in the house about three years until the home was repossessed when Vernon could not repay the $180 loan. Vernon and Gladys worked various jobs while in Tupelo and moved several different times during the thirteen years they resided in Mississippi. The Presley family lived in other locations in Tupelo until Elvis was thirteen years old when they moved to Memphis.

Elvis returned to Tupelo in 1956 and 1957 to perform concerts at the Fairgrounds. Elvis donated the proceeds from the 1957 concert to the City of Tupelo to start a park in the East Tupelo area.

The City purchased 15 acres which included the house where Elvis was born. In 1971, the East Heights Garden Club began to improve the birthplace as a club project.

Over the years the club purchased furniture and other pieces to duplicate the house’s contents from when the Presleys lived there in the 30s. 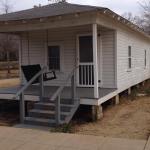 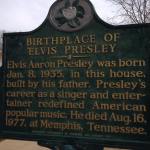 For more information about tours and hours of operation please visit: